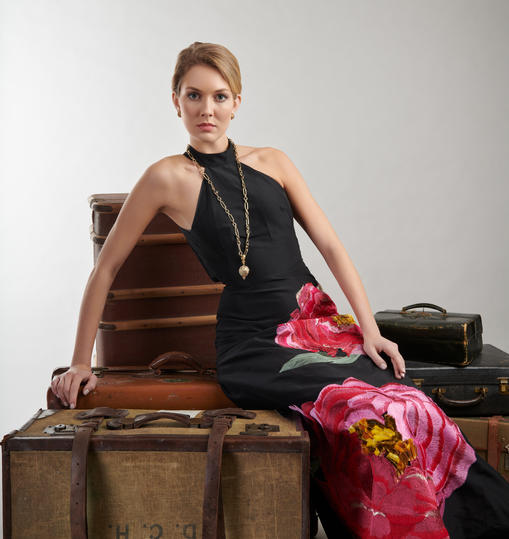 Fresh from my recent trip to India, I spent an afternoon in the V&A museum's Indian galleries, and there, in a small cabinet on the side, was a gold necklace. Unusually the necklace was threaded on a heavy black cord, almost a rope. Along its length, evenly spaced, were golden amulets with wonderfully deeply-engraved textures and all of them with differing outlines. As I read about it from the notes inside the cabinet, I learnt that it had come from southern India - as part of a dowry. The gold pendants, I realised, represented seed pods.

Slowly I walked back across London to the studio to ponder on the idea.

Sometime later I asked Nick Barnard - the keeper of metalwork at the V & A if I could possibly look at it more closely. And also if they had any background information on the jewel and its history. I came back after a few weeks and, carefully putting on some gloves, I was allowed to handle the jewel.

It was lighter and more delicate than it had seemed in the cabinet. The gold gave the feeling of being old and treasured and the seed pods seemed more like a series of lockets with secret inner stories.

On another table behind, Nick had laid out some documents about the history of this type of Marriage necklace with the individual Thali (charms) from Southern India.

I 'disappeared' for a while into another world of exotic spices, markets, and engraved gold. The spices, fruits and seed in the necklace were (in no particular order): aniseed, Tulasi-Madaam (sacred basil and very common in India), mango, plantain, coconut, brinjal, coriander, almonds, melon and nutmeg.

Some months later, when the three spice pendant designs I had sketched out from that afternoon in the museum were almost complete, I decided to wear one of them for the day and 'get to know it', wearing it on a long chain in the shop.

I had decided to call this trinity of pendants: Almond, Brinjal and Coriander after the various seed pod Thali of the necklace. All three of the marriage pendants had by a mistake of dimensions on paper become larger than my initial sketched idea. But, almost as soon as I put it on, it was admired and its gnarled, deeply engraved surface made it feel old and treasured.

I often find it is only when a design is finally made, the stones set, the gold burnished and polished, and I put it on that I am ready to let the design become part of the collection. It's like a birth, a new beginning and it comes with all the excitement and nervousness of any new adventure.