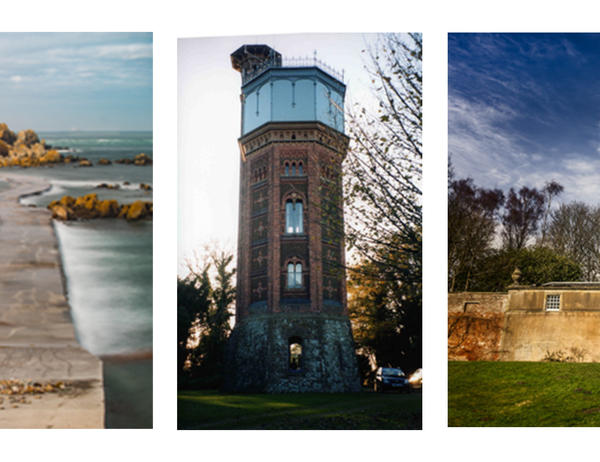 Daydreaming of where to staycation…

The Landmark Trust
Recommended by SLW

As described on their website, "The Landmark Trust is a charity that rescues important buildings that would otherwise be lost". They present an eclectic collection of over 200 historically rich, sometimes eccentric, and almost always spectacular buildings dotted around the UK (with a couple in France, Italy and Belgium too) that have been carefully restored so that they can be rented out to the public. Excitingly, they are releasing their latest edition of the Landmark Handbook (physical and an e-book version) in the next couple of weeks.

Some spectacular sites to whet your appetite:

A 19th century fort on the Channel Island of Alderney, originally used as a refuelling station for steam ships, but also helped to protect the UK from German invasion during WWII. At high tide, you are cut off from the rest of the island and will have an amazing 360-degree view of the sea.
An 18th century summerhouse built in the shape of a Pineapple up in Dunmore, Central Scotland, originally built for the 4th Earl of Dunmore.
A Victorian water tower on the edge of the Sandringham Estate. The second floor was once used as a viewing point for the royal family and their guests during shooting parties and picnics!

Mr and Mrs Smith describe themselves as a "A travel club", offering a wide range of beautiful destinations to go and explore in the United Kingdom, with an entirely bespoke travel booking experience for hotel lovers. Their website is definitely worth a visit if, like us, you are already dreaming of where you would like to go as soon as the travel restrictions are lifted. From a cosy hideaway in Scotland, a chic London city break (why not holiday in the capital and visit places you have had on your wish list for years!), to a cosy cottage in the Cotswolds. Mr and Mrs Smith really do have something for everyone, and better yet, they pride themselves on getting the best price for each service they provide - if you find a cheaper rate, they promise to match it!

The PIG hotels are made up of six of the most beautiful 'restaurants with rooms' set in the south of the UK. Each PIG has its own identity, each evolved rather than too designed, and each prides itself on putting their kitchen garden at the heart of what they do. Their obsessive commitment to local and home grown produce allows them to celebrate the seasons and to create a menu of simple British garden food, in line with their '25-mile menu' ethos. Perfect for a staycation this year! To show their huge thanks, The PIG are donating the night before their re-opening, across each of their hotels to NHS workers.

They are asking people to nominate members of the NHS, care workers, volunteers or researchers who have made a difference to all of our lives. Loving local is in their DNA, so they want to support those who are part of their very own communities and who live or work within a 25-mile radius of any of their hotels. Nominations close tomorrow (22nd May) so click here to find out more and to nominate someone!

The Seven Sisters chalk cliffs in Sussex is one of the most beautiful places to go and escape from London. The ivory white cliffs stretch from pebbly Seaford to Eastbourne and it is the most picturesque coastal hike I have ever done. The views from the top really are breathtaking and worth dusting off those hiking boots.

This book is a tale of historical fiction based around the Glencoe massacre of the MacDonald clan in the late 1600s. I have chosen it for my love of the way in which the author describes the Highlands in such vivid and stunning detail through the voice of her young heroine, Corrag. Living a simple life amongst nature and the elements she heals the people she comes across with plants and herbs. Over 300 years ago Corrag was accused of witchcraft and faced the death sentence. Today her wisdom and knowledge of mother nature would be respected and she would no doubt be in demand as an herbalist and healer.

'The Fruit-Seller's Philosophy' by Kajal Ahmad

I recently threw an online party for my Year 13 class. I sent them all a little package in the post with a party hat, sweets, balloons, bubbles and a party popper. We then all put on our hats and burst our party poppers at the same time on Zoom whilst in our various homes around London. As part of the the celebration, I asked them all to read aloud their favourite poem and tell us why they loved it. This one was read by a girl with Kurdish heritage and she said that it is a poem that all Kurdish people know, and she said it always reminded her of her homeland because there are lots of fruit sellers in the streets, everyone pops into each other's houses all the time and so the joke about the neighbour is a popular one. I thought it was really lovely. To read the poem click here.

Set in the aftermath of WWII, The Guernsey Literary and Potato Peel Pie Society is about a writer who forms a close bond with a group of people who came together in the harsh conditions of German occupied Guernsey. The film is full of breathtaking coastal scenery and caused me to think wistfully about being in Cornwall especially with the beautiful sunny

days we have been experiencing. In fact, when the end credits rolled I discovered that many scenes had indeed been filmed in Cornwall! The film perfectly evokes a sense of time and place and you really care about what happens with the characters. You can watch it on BBC iPlayer and Amazon Prime.

A podcast to listen to…

The Travel Diaries with Holly Rubenstein

The Travel Diaries is a weekly podcast hosted by Holly Rubenstein where celebrities are quizzed about their best travel memories and how these experiences shaped them into the people that they are today. Holly talks to a really wide range of interviewees, including Jo Malone, Dev Patel, Ricahrd Branson, and Poppy Delevingne, but the questions she asks are always the same: their first travel memory, the first place that they ever fell in love with, the place where you learnt the most about yourself, your all-time favourite destination, their hidden gem - somewhere they have discovered that perhaps not many other people have, somewhere they would never go back to, their next big adventure, and the destination that is at the top of their bucket list!

Cakes to remind you of the beautiful jewels and the delicious smelling Diptyque candles lit throughout the Cassandra Goad shop.

The Making of Topkapi