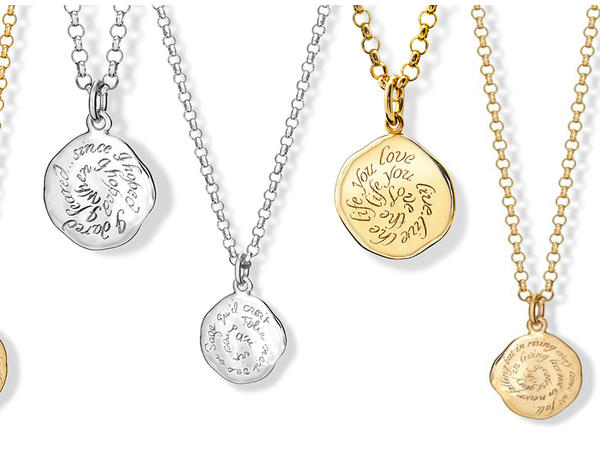 Cassandra Goad quote pendants are the perfect present for any occasion, available both in yellow gold and silver.

Do not follow… - 'Do not follow where the path may lead, go instead where there is no path and make a trail.' Inspiring words from Cassandra's Cousin

Never Assume - 'Never assume…' from a friend of Cassandra.

Go Confidently… - 'Go confidently in the direction of your dreams. Live the life you have imagined.' (Thoreau 1817-1862)

Shackleton - 'May tomorrow see the end of all our difficulties. Difficulties are just things to overcome after all.'
(E.H. Shackleton, 1909, Antarctic expedition)

Only with… - 'Only with long experience and the opening of your wares on many a beach, where your language is not spoken, will you come to know the worth of what you carry. The delicate goods of justice, love, honour, forgiveness and courtesy are valid everywhere'. (Freya Stark, British explorer and writer)

He who feared… - 'He who feared he would not succeed, sat still.' OR 'Sedit qui timuit ne non succederet ' (Horace)

Our Father - 'The sower Arepo holds the wheels with care.' The words for this pendant are a secret code for the words of the Christian Our Father prayer. It was a secret code that the Christians had on the outside of their house during the Roman Rule. The Latin Words are a Palindrome. SATOR AREPO TENET OPERA ROTAS

Everyone…- 'Everyone is the age of their heart.' From Cassandra's Journey to Brazil

Be brave… - 'Be brave my heart, have courage my soul.'

Onwards... - 'Onwards…' from the writings of Henry Worsley the Shackleton expedition explorer who died in 2016. A donation will be given to the Shackleton Foundation.

The greatest glory… - 'The greatest glory in living lies not in never falling, but in rising every time we fall.' From the words of Nelson Mandela. A donation will be made to the Desmond and Leah Tutu legacy foundation.

If you dont... - 'If you don't explore you'll never discover'. From Alice in Wonderland by Lewis Carroll. Winner of the National Poetry Day Competition.

Dare, always dare…. - Specially created by Cassandra for the Old Vic to commemorate their 200th anniversary in 2018.

'Be thou my vision O Lord of my heart'…. - Words from the Irish poem "Rop tú mo Baile", and often attributed to Saint Dallán Forgaill in the 6th century.

'May love abound all round…' In memory of Horatio Chapple, an aspiring doctor. A donation will be given to Horatio's Garden.

'The world is your oyster...' - A quote from William Shakespeare's 'The Merry Wives of Windsor.' From the 35th anniversary collection 2020.