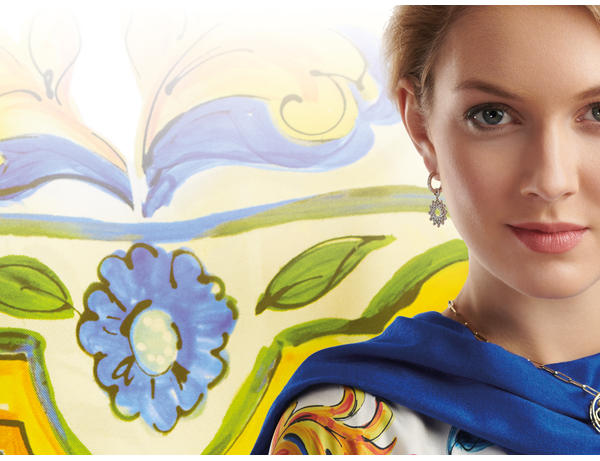 A Slice of Sicily

Sicily intrigued me, the island that floats as tempting as a jewel in the centre of the Mediterranean. Shaped by waves of conquests and left tinted by the settlement of differing people's since the 8th century BC.

First came the Greeks with their sublime ideals, followed by the realities of Rome. Then the Norman's - who gave England Westminster Abbey - built Sicily's wondrous cathedrals of Cefalu, Palermo and Monreale the last of which inspired my Volo d'Angelo design.

Steeped in history and a wealth of creativity, I was almost hooked. Yet it was a challenge given to me, in a small package, typed neatly and succinctly that made Sicily finally irresistible: 'could I too be a craftsman like Daedalus?'

The designs flowed into several sketch books. Mosaics from La Martorana were transposed into jewels sparkling with diamonds.

Stories of fig trees were retold in gold bracelets and my honeycomb for Erice made it golden once again.

The first time I went to Sicily was in january, the town of Palermo was quiet, the sea was angry with white waves and the sky was dotted with hailstones. Not the Sicily I imagined, and yet I met amazing people, feasted on the most incredible art especially in the chapels decorated by Serpotta, admired the festoons of fruit at Quattro Canti that became delicious earrings. I watched the sunshine dance on the glazed Pigne on the balconies of Palazzo de Napoli nearby and sat and watched the world go by in the cafes with a warming cup of coffee.

As I researched the collection, I must have traveled to Sicily almost a dozen times. The sunshine warmed the terracotta on the buildings, cast long shadows across the piazzas and everywhere delicious citrus fruits tumbled from overfilled baskets inspiring my Agrumi designs.

Every time I came back to london I knew I could have a little 'fix' of la Bella Sicilia at Iddu the VERY Sicilian restaurant and cafe in South Kensington Sw7, London http://iddulondon.com/.